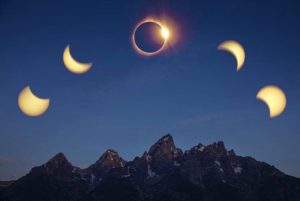 Florida Judge says the trial must go on, despite celestial events.Judge Merryday denied the United States Attorney’s motion, that “… boldly moves (where no AUSA has moved before) to postpone a trial because an agent of the Bureau of Alcohol, Tobacco, Firearms, and Explosives, has pre-paid the cost of visiting the zone of “totality” of a solar eclipse.”  Unimpressed with the motion, and apparently the eclipse itself, the opinion notes, “An eclip se is just another astral event, precisely predictable since the day the Babylonians discovered the governing formula (although some contend for an earlier discovery).Here’s the full opinion: UNITED STATES DISTRICT COURT MIDDLE DISTRICT OF FLORIDA TAMPA DIVISION UNITED STATES OF AMERICAv. CASE NO. 8:17-cr-266-T-23JSSJOSEPH BISHOP ____________________________________/ORDERDefinitely recurrent, sometimes consequential, and occasionally spectacular,the solar eclipse understandably occupies a provocative and luminous place inhistory and in art. For example, Herodotus reports that a solar eclipse during thewar between the Medes and the Lydians caused the combatants, who interpreted theeclipse as a divine omen, to suspend hostilities and to negotiate peace. In Borodin’smagnificent opera, an eclipse portends disaster for Prince Igor’s military campaignagainst the Polovtsians. In a popular 1970s song, the splendid Carly Simonintroduced the attendance of a former suitor (reportedly the actor Warren Beatty) ata solar eclipse as probative evidence of his putatively insufferable vanity:Well I hear you went to Saratoga And your horse, naturally, won Then you flew your Learjet up to Nova Scotia To see the total eclipse of the sun Well, you’re where you should be all the time And when you’re not, you’re with some underworld spy Or the wife of a close friend, Wife of a close friend, and You’re so vain You probably think this song is about you On a higher plane, Wordsworth wrote about an eclipse in 1820:High on her speculative tower Stood Science waiting for the hour When Sol was destined to endure That darkening of his radiant faceThe solar eclipse is no longer mysterious, supernatural, foreboding, orominous (or even “total”; owing to the solar corona, the darkness of a “total” eclipseis only partial). An eclipse is just another astral event, precisely predictable since theday the Babylonians discovered the governing formula (although some contend foran earlier discovery).On this occasion, an Assistant United States Attorney boldly moves (where noAUSA has moved before) to postpone a trial because an agent of the Bureau ofAlcohol, Tobacco, Firearms, and Explosives, has pre-paid the cost of visiting thezone of “totality” of a solar eclipse that will occur on August 21 (about the eclipse,the motion oddly uses the phrase “scheduled to occur,” as if someone arbitrarily setthe eclipse, as an impresario sets a performer, to appear at a chosen time and place,subject always to some unstated exigency).* Cruel fate has dictated that the August21 eclipse will occur during the trial of an action in which the agent is a principalparticipant on behalf of the United States.In any particular month, about four-hundred actions pend before each activedistrict judge in the Middle District of Florida; each action typically involves severallawyers, at least two parties, and an array of witnesses. A trial prompts the clerk tosummon scores of potential jurors. The present motion proposes to subordinate thetime and resources of the court, of the opposing counsel, of the witnesses, and of thejurors to one person’s aspiration to view a “total” solar eclipse for no more than twominutes and forty-two seconds. To state the issue distinctly is to resolve the issuedecisively.When an indispensable participant, knowing that a trial is imminent, pre-paysfor some personal indulgence, that participant, in effect, lays in a bet. This time,unlike Carly Simon’s former suitor, whose “horse, naturally, won,” this bettor’shorse has — naturally — lost. The motion (Doc. 31) is DENIED.ORDERED in Tampa, Florida, on August 18, 2017.
Please follow and like us: